Really, it was my fault.

Tuesday was a crazy day with two little boys. I think, though, it began the day before. Luke-bean had strep AGAIN. I ran him over to Manhattan for an early evening appointment. The decision was made to give him a hefty dose of penicillin via a shot and keep him monitored as his temp had reached 104.5.

I was pretty fearful of what that meant with the little boys in tow. But, they were awesome. Absolutely no problem at all. They were probably petrified they would have to endure the 90-second shot in the booty like poor baby boy did.

So, Tuesday came with a normal preschool morning. Who knew but God at that point what the rest of the day would hold. In the course of the afternoon and evening, this is only a partial list of what occurred with 2 little boys:

*Boys found in window well on side of house.
*Boys rescued by their momma back up out of window well.
*Boys told stay out of window well.
*Momma returns back in house with sick boy; cue little boys right back into window well.
*2 little boys giggling like crazy returning into house with Isaac's toolbox from Poppa.
*Toolbox opened. Multitudes of frogs jumping all over the house.
*Frogs recaptured into toolbox. Boys told to get those frogs back outside.
*Momma looks out door. Little boys are launching frogs off our deck. Should I mention we have a walk-out basement with the deck off the main floor???
*Boys find super-soaker water guns. Fill them with water from dog dish. Boys stand at front windows and shoot water into house through screens.
*Boys ask if they can do sidewalk chalk. Of course. Boys color side of house with sidewalk chalk.
*Honestly, I have no idea what happened next except they returned to the door eventually covered in dirt, grass, chalk, mulch and both bleeding. Honestly, I didn't really care.

I cleaned them up, put them in jammies, turned on the TV and thought about how big of a bowl of ice cream I was going to eat in 24 minutes... 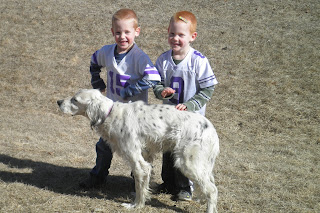 You are such a good little mama! I might have lost it somewhere in the midst of all that! Hope Luke is feeling much better by now, and you are all able to enjoy the beautiful weather! Hope you can come to Salina sometime soon and we can hang out or play at the zoo?

Hello there, simply become alert to your weblog thru Google, and fosbobetund that it’s really informative. I’m gonna watch out for brussels