The binky is gone. G.O.N.E. A snap decision the first of the week pushed us to take it away. The boys were only using it at nap and bedtime. I think Jereme and I have had a harder time with it than the boys. They've done wonderful. A little crying the first night and none since then. They are having a harder time settling down...usually they were out within minutes of being laid down. Hopefully, as they adjust they'll get back into that routine.

I was ready to see the binky go but I've actually been really sad about it (can you say PREGNANT and HORMONAL???). I am sad for the boys; they loved their binky and were so excited to get it each nap/bed time. It's hard to be the grown-up and make those decisions!! It also is just yet another milestone proving these big boys really aren't my babies anymore. Boo-hooooo!

But, here is a photo of what is apparently going on in the bedroom without a binky at night. We've had this occurence now twice...I am thinking duct tape to keep that baby on him, what do you think??? 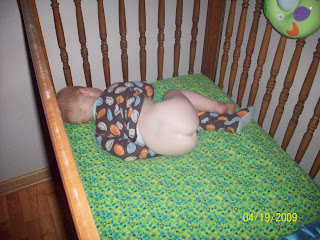 That pick is so funny! I have heard of people having to use duct tape.
Great to talk to you today. Hope to see you soon!

Well THAT is why your blog is now labeled at pornography at work. And I'm not joking, I can't get to it from work anymore! I guess a baby tushy is just too much for those goody toe shoes to handle!