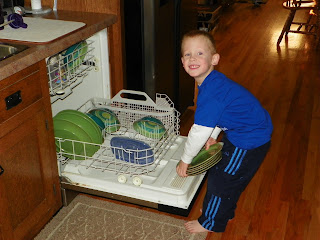 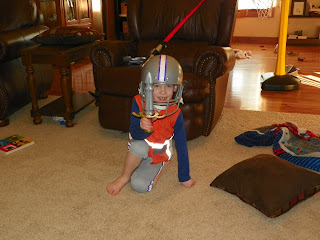 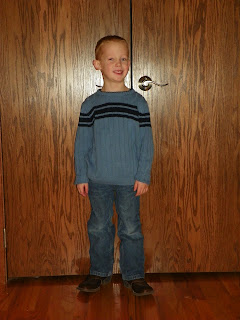 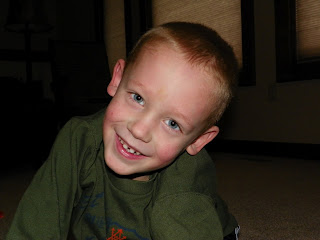 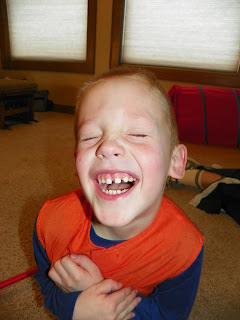 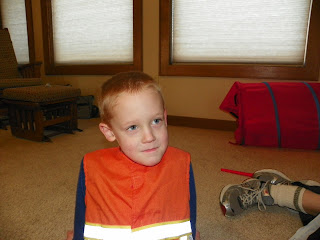 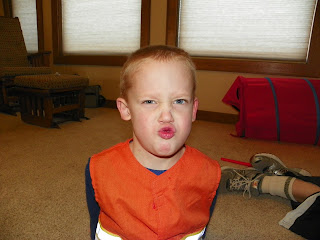 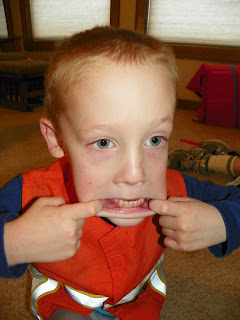 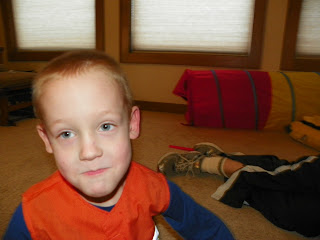 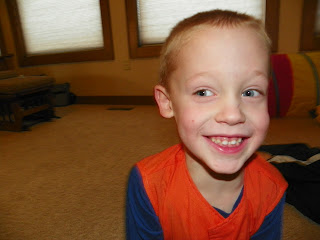 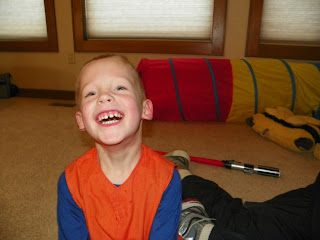 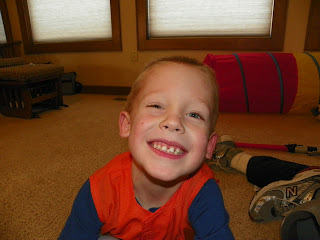 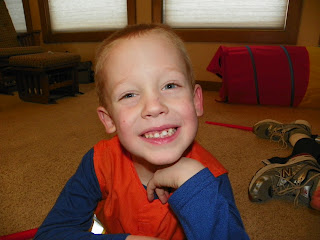 I promise. I don't think I ever put this picture of the 3 boys up from Christmas. This was the night of their program at preschool. Isaac just might be our thespian! 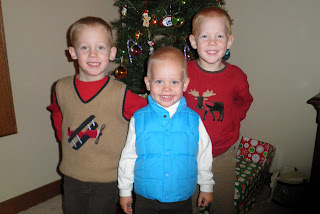 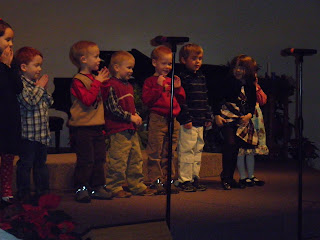 I have no idea where February went, do you?
Posted by Diane at 9:52 AM No comments:

I love listening to the conversations of the boys. The little boys (by the way, do you catch that we call Jorden and Isaac the 'little boys'?) can be especially funny! Today's convo after pre-k:

Jorden: Momma, why are those policemen there?
Me: They are blocking and directing traffic for a funeral procession.
Isaac: What's a funeral procession?
Me: When someone dies, they usually have a service at church and then all drive out to the cemetery together.
Jorden: Isaac, did you know they bury people in the ground?
Isaac: Ya! And, you get a great big stone when you die.
Jorden: Does the stone make the hole in the ground?
Isaac: No, I bet someone digs a hole during the night before the funeral.
Jorden. YA!!! With lots of shovels. I wonder who carries the body??
Isaac: Oh Jorden, you know that. They carry the body with a bucket loader from the back of that big car and take it over and dump it in the ground to bury him.
Jorden: Ohhhhhhhhhhhhhhhh!!!

I continued driving on in silence while choking down my Diet Dr. Pepper wondering how we evolved into the Mob???

And, then it took me back to a convo I just had with my sister a few days ago. I was telling her how I found a Madonna CD and put it in to listen while cleaning. After listening to a few of the songs I totally understood why the Pope that she was Satan incarnate during the 80s.

Anyways we got to laughing so hard about this little story. I was about a 6th grader who had two older sisters that loved Madonna and we lived across the street from the local swimming pool that blared the radio all day long during the summer. I was very familiar with Madonna's songs. Very familiar.

So, fast forward to our family vacay late that summer. We went to Colorado and were on our way home. We were rolling in our super awesome black and orange conversion van. It was really dusty, which if you know my dad, doesn't happen often with vehicles of his. We had stopped to fill up with gas. The black tinted windows on the back of the van were especially dusty and just calling for me to write on them. Dad had already gone in to pay so I figured I'd do the unthinkable and write on his DUSTY van!!

And, what did I write? Remember...I was into Madonna! So, I quickly pulled up my most fave song of hers and wrote some lyrics. One window proudly displayed, "Like a Virgin!" and the other one said, "Touched for the very first time!" My sisters walked around the back and gasped, "DIANE what are you doing? Dad is gonna kill you!" And, then after reading it, Denise says, "DO YOU EVEN KNOW WHAT THAT MEANS????" I wanted to save face, of course, and snottily replied, "YES I KNOW WHAT THAT MEANS!" even though I had no clue. We saw my dad leaving the gas station and quickly piled in the van without a word while dad walked around the front of the van, got in and headed east to Valley Center, KS.

I've always wondered how long he drove that van full of girls with mom in the passenger seat along I-70 with cars passing, undoubtedly giving him strange looks, before seeing my very special message...
Posted by Diane at 1:46 PM 3 comments: