Against my better judgment, I went to Wal-mart this morning. As most of you know about me, I am frugal to the core. But, I also refuse to shop at Wal-mart. Unfortunately, many of you have had to hear at least 20 of the 500 reasons why we NEVER go to Wal-mart. Today, though, the idea of 16 more diapers for $2 less than I normally pay lured me in. I decided to also get some groceries.

After finding a parking spot practically out on the highway, I try to get a grip on my composure. But, I am silently cursing, wondering what in the heck all these people are doing in Wal-mart at 1045 AM on Thursday. I find the cart return and take 2 carts to my car to load up the boys. Return cart #1 as it has no safety belt to restrain my kids from climbing out. Load Jorden. Get Isaac out. Put him in cart #2. Say a nasty word. That cart has no saftey latch either. Carry Isaac to cart return while hoping no one runs over Jorden sitting in replaced cart #1.

Start walking inside. Wind blows 40+ mph. Learn that I have gotten 2 carts that can't be wheeled straight. Walk in doors. Try to push and pull 2 carts through about 50 people standing in entry way. Wonder if this is a big mistake.

Head to customer service as I need to return something bought months ago. Sigh as I realize there are 20 people standing in 2 lines. My line moves forward quickly and then stops when I am 2 people away from being helped. Watch Customer Service Rep walk away. Wonder what she is doing. Stand for about 3 more minutes. Ask other lady if this line is now closed. She says, "yes". I try to control temper. VERY loudly inquire as to why no one in my line was told the line was closing. Stomp off. Make big scene trying to wheel 2 carts that won't go straight through crowd. Decide to grocery shop first. No probs.

In check-out line, cashier inquires about item to be returned. Tell her I am returning. She asks to see my sticker on it from coming in the door. Huh? There were 50 people in the entry, remember? I tell her I have none. She and I argue about returning it. I win.

Head over to customer service again. Only 2 people in line. Try to keep my patience as waiting. White Trash Couple (WTC) walks up behind me and starts talking and fooling with the kids. Boys look scared and start to cry everytime the people get close to them. I tell boys it's okay. WTC can't seem to figure out that the boys are screaming b/c they are scaring them and continue getting close to them and "tickling" their tummies. I finally turn and give my best fake smile and say, they are going through a little phase where strangers scare them. I try hard to not be scared by couple either once I see them.

Stand in silence for about 15 seconds. White Trash Woman asks how old the boys are. I say about 14 months. She says, "both of them?". I say, "yes". She says, "how did that happen?" I pause and say, "well, they are twins". She thinks for a moment and says, "So, twins are the same age?"

Moral of the story: It is not worth 2 freaking dollars of savings to shop at Wal-mart!
Posted by Diane at 12:32 PM 2 comments:

Now we are eating at the table and out of a bowl (most of the time) like big boys! One of these days, I'll get brave and try utensils.... 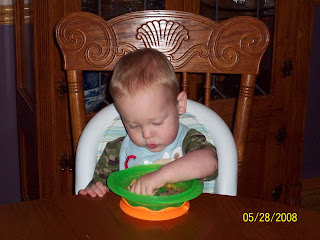 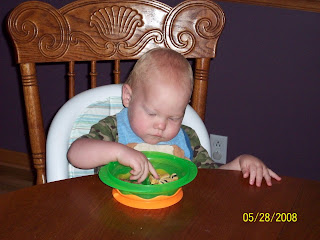 Not only do the boys look just like their daddy, they act just like him, too. Every time I get the vacuum out, they both start bawling and run the other way.
Posted by Diane at 2:36 PM No comments: 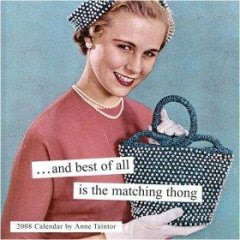 We were lacking on both accounts this weekend but I don't think we'll complain. We spent a rather eventful Friday night down at the farm with Jereme's family and a good portion of the evening in the cellar. His dad's house was hit with a tornado but everyone was just fine and that is what matters. The kiddos handled everything like real troopers. No tears, but the boys only got about 3.5 hours of sleep and mom and dad got even less. The boys were amazing little guys all day on Saturday while things were crazy. But, we are thankful everyone is safe and sound. The weather is still proving to be a little hairy, even today!
Posted by Diane at 6:25 PM No comments:

So, here's the deal. You can move to a different town. You can buy a little bigger house in a little nicer neighborhood but it still comes down to the fact that you're a redneck.

Now, you're probably wondering what prompts me to say this. Well, here's the story.

Jereme decided to redo a landscape bed on the side of our house. See blog for pics of him digging down and then he shovels out all the rock. He sends me to get a load of dirt in the bed of his pick-up. I don't think to sweep it out before they dump the dirt. Jereme uses all the topsoil. He then mulches the bed in nicely and we get several nice rains.

A few days later, I go walking along that side of the house and gasp out loud at the weeds coming up in the mulch bed. I make a mental note to tell Jereme to look at it and bring home some round-up. After all, he is the Monsanto man. I forget. 3 days later, I walk out and see the almost the entire mulch bed covered with these "weeds". It is crazy. Jereme gets home and I say, "hey Mr. Monsanto, you need to get your round-up out and kill that crap on the side of the house."

He laughs and says that's our corn plot. I said, excuse me??? He says, we didn't sweep out the truck before the topsoil was dumped and there was corn seed in the back. I think, oh dear Lord, are you kidding me? We have corn growing on the side of our house. The neighborhood must think we are the biggest hicks ever.

Catch up on pics

Our mom is over the top about this stroller. Big deal. 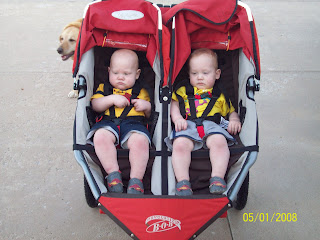 Abby, the most patient dog ever! 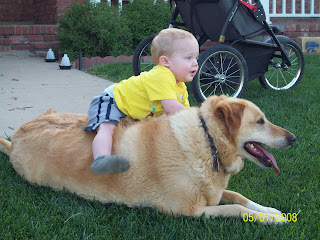 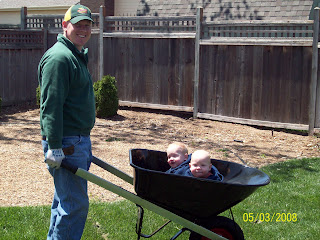 Have I mentioned that I love this guy?! 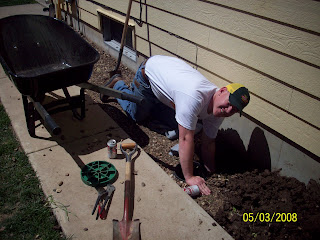 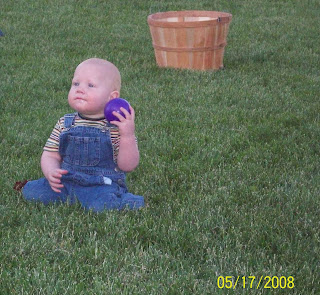 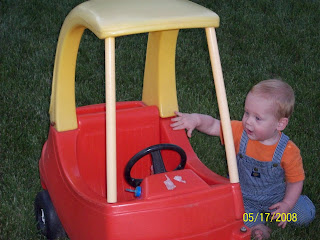 This pic needs no words! Their faces say it all! 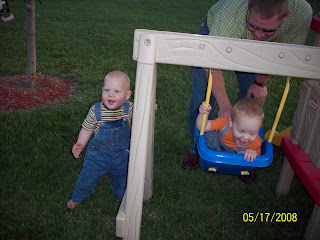 Hanging out on the front porch 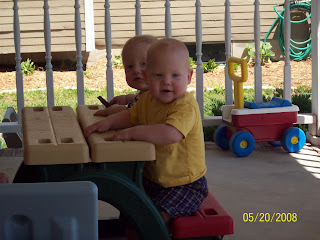 Jorden took his first steps in life on Saturday!! He actually took 4 steps on his very first try. Brave boy!
Posted by Diane at 9:16 AM No comments:

You know it's true love when...

So, this morning I am flossing my teeth. I have a permanent retainer/wire on my bottom teeth to hold them in place. Sometimes, it is a little tricky to get the floss through the wire and floss in between them.

***Sidenote: I can hear some of you [gasping] in the background b/c all this time, you thought I would be a closet non-flosser or flosser only every other week like you are. Don't worry, it would go against everything in me to be Miss Perfect Flosser once per day. This just happened to be the day...Thank God for me inheriting good teeth.***

Every once in a while...

Every once in a while, I get a wild hair and think my children are not routined, highly-schedule dependent kids. I think to myself, oh they'll be just fine if we skip afternoon nap or if afternoon nap is only 30 minutes long.

But, then, I am reminded at bedtime when a baby must cry for 26 minutes to wind down and go to sleep. And, then, I reminded again when both babies lay on the floor the next morning crying constantly b/c they are tired. Then, I say to myself and anyone who will listen that we will NOT be skipping naps again anytime soon, regardless of what is going on. And, because 9:07 AM is too early to pour a drink, we'll just have to stick to that darned ol' routine.
Posted by Diane at 9:04 AM 1 comment:

Warren E. Ade was born October 27, 1923 south of Gypsum, KS. He was the oldest child of Christ and Ruth Ade. He has one sister, Dorothy Folmnsbee of McPherson, and one brother, Donald Ade of rural Gypsum. In 1943, Warren joined the United States Navy. He served three years and was a veteran of World War II.

Warren married Marcia Forsberg on November 13, 1943. In the spring of 1947, Warren and Marcia moved to their current home and have resided there since. Warren was a lifelong member of Temple Church. It was a rare Sunday that he wasn't present, missing only for health, weather or the great-grandkids.

James Warren, a son, and Judith Ann, a daughter were born to Warren and Marcia. Jim died December 24, 1964. Judy married Gary Long in 1967 and Warren was a proud Grandpa to their three daughters Denise, Carol and Diane.

Besides his service in the Navy, Warren farmed on his family farm and eventually began farming his land. Warren took great pride in his profession. He was always willing to take someone out to check the crops.

Warren greatly enjoyed the many helpers who participated in wheat harvest. The helpers never had to worry about lacking for instruction from Grandpa. Warren loved having his granddaughters and two of his great-grandkids ride with him during harvest. All three granddaughters have vivid memories of Grandpa taking them to the co-op for a pop or riding along to the pasture, amazing them by always knowing each cow and calf and their date of birth.

Warren lived his life to the fullest and loved to tease those he loved most. He recently instituted a new rule at his home: No time-out chairs for his great-grandkids. He was sure proud of those six great-grandchildren: Taylor, Caleb, Isaac, Jorden, Leah and Tara.

Warren will be greatly missed by those that knew and loved him. But, he left a legacy for his family in his dedication to his wife of almost 65 years, his love of the land and his steadfast faith.
Posted by Diane at 9:07 AM 2 comments:

My grandfather, Warren Ade, died suddenly Sunday evening. We are shocked and devastated by the loss of him already. Please pray for our family, especially my grandma and mom in the coming days and weeks.
Posted by Diane at 10:40 PM 2 comments: