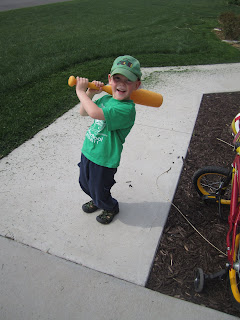 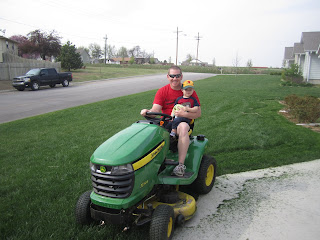 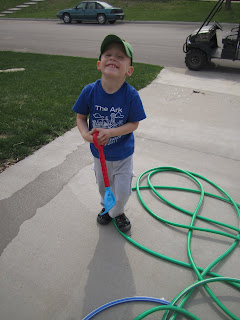 It was an accident. Really and truly. Sunday afternoon we were outside, enjoying a beautiful afternoon. Jereme and I were playing baseball with the little boys. Jereme was the pitcher and I was acting as catcher. Jereme was lipping off about how I wasn't doing a very good job. I thought, well, I'll show him next time...we'll see if he can catch my hardest throw. What I didn't realize was that he wasn't paying attention when I threw it and my aim might've been a wee bit off. And, a wee bit low. In fact, as Jereme was looking over at Isaac, I might've thrown a fast, hard ball and hit the poor guy in his um, er, groin-area.

I'd like to tell you that my reaction was to run over and make sure he was okay as his feet seem to fly out from under him and he face-planted into the ground and curled into the fetal position. Really, that's what I wish I would've done. Instead, I was laying on the ground laughing so hard I was crying and trying super hard to not wet my own pants.

The boys couldn't figure out what the heck was going on and kept asking Jereme what was wrong. Then, they'd ask me but I still couldn't pull it together to stop laughing. Jereme was near tears. Finally, he managed to to gasp, "YOUR MOM HIT ME IN MY BALLS!" (Which, I am sure will come back to haunt me in the most inappropriate moment one can imagine.)

Moral of the story...better make sure you're paying attention when you're smarting off to me!!
Posted by Diane at 10:02 PM

Your mother did the same thing to me 35+ years ago with a basketball, nine months later Den ise was born!!!Think you will have that kind of luck?

hahahaha....poor guy!! Good thing you are done having kids...although it looks like it didn't make a difference for your parents!

Oh my gosh that is hilarious! That will teach him. I have been thinking about you lately and just wanted to drop by and say HI! No pun intended, ha.