The boys have been fighting with each other a LOT...especially over toys. At the peak of it a few days ago, Jereme and I decided that perhaps the boys needed to feel the sting of giving away some toys. We didn't ask them to give away new toys or special toys but go through ALL of our stuff and decide on what things really don't get played with (AKA thrown across the room, used as weapons, etc) and give them to someone who needs them.

Um, so two days later, we have filled 4 diaper boxes of toys. We also filled a trash sack with broken toys, ripped pages/books, etc. Then, we put all the Lincoln Logs (minus a "gun" or two for Isaac as some of you know!) and small farm stuff in their own boxes to get out and play with as quiet activities. You got all that?? Again, 4 boxes, 1 trash sack and 2 boxes set aside for special play time. You.can.not.tell.one.bit.of.difference.

Incredible. I'm embarrassed about how much 'stuff' our kids have! And, their parents, too.

And, another wow...tomorrow marks the start of our 11th season as ALUMNI (alumnus?) season ticket holders for KSU. That truly doesn't seem possible either. Funny how previously, we'd get there AS SOON as the gates opened so we could maximize our tailgating time. 11 years and 3 kids later, we try to time it to the second...how long prior to the game can we be there that will allow for a little fun but not too much fun so we can make it through most of the game with the least amount of meltdowns by the little people?? Wouldn't have it any other way!! GO CATS! 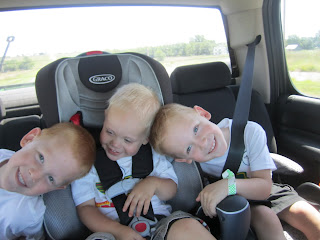 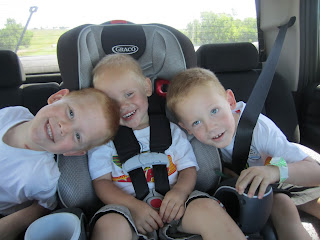 I need to do that with our toys BADLY... KSU games are definitely different nowadays!